The protection of plants and shoots while they are growing

Care of the crop in its growth

Without any doubt, the current reality is that the matter of reforestation has had a major impact on the opinion held by the vast majority of people.  As the number of the world’s inhabitants becomes greater, the absence of vast expanses of greenery and forests becomes more notable, now that they are becoming landscapes of dwellings to house more people or landscapes serving the cattle or lumber industries for their production.  Today the impact of uncontrolled logging has made a profound imprint in diverse places around the world, with the most serious consequences being the destruction of ecosystems and major flooding.

The two main causes of deforestation are natural disasters and exploitation by the timber and agricultural industries, but it is also caused by urban growth.  Though it is hard to accept by some, a large part of this problem is caused by humans.

Fortunately, for years there has been the practice of reforestation which helps to regenerate deforested areas by means of planting and caring for new trees.  This practice gives new opportunity  to those areas that can be saved from sure destruction if deforestation is continued or completely regenerate, as the years go by, a totally deforested area.  The benefits generated by reforestation are quite ample, ranging from  oxygen production to climate control.  Consequently, nowadays, when there seem to be more and more indications that climate is behaving erratically and that the air that we breathe is more and more polluted, reforestation can provide an important locus for changing these and other unfortunate aspects.

Although reforestation in theory continues to be the regeneration of a forest or an important green area, there are a variety of ways in which this can be done.  Undoubtedly, the best known way is the planting of trees, but this is just one facet of reforestation.  There are also other parts of the same parcel, such as the protection of plants during reforestation and the planting of agroforestry crops.  It is also necessary to keep in mind that reforestation is not something that only happens on a grand scale, but that it can also be done on a small scale in a rural setting or even in urban spaces such as schools, plazas, parks, and commons.

But with reforestation, as with just about anything else, what can go wrong usually does.  As in other endeavors involving forestry, agriculture, or something similar, reforestation is not immune to the problems that commonly afflict these such as vandalism, attacks by plagues of insects as well as of birds and of rodents, fungus diseases, severe weather, etc., which at times can make the reforestation process difficult, especially when dealing with a large area and needing to pay attention to an enormous quantity of plants.

One of the problems most likely to beset an area under reforestation is animals attacking the stems, leaves, and bark of the young plants and trees.  Even in urban areas this is the most common problem since many animals find the soft stems of new shoots to be delectable and make them a part of their diet.  Plants that bear fruit or seeds are targeted in particular by birds and some rodents.  The bark of reforestation  saplings and of some shrubs is sought out by other animals such as deer and rabbits.  This problem is to be found in rural areas or anywhere where this wildlife is found in abundance.

That some animal should enter a reforestation area can be harmful for the entire reforestation process, not only because of the damage that can be done by the animal eating the plant or damaging the bark, but also because of the risk that the animal is bringing  some kind of disease or bacteria with it that can affect the plants and initiate some kind of epidemic among them.

Protection of plants in reforestation

A common way of combating this problem and providing for the protection of plants, by those attempting reforestation of an area, is by employing the help of wooden fences, plastic sheets, metal fencing, or electric fencing.  But this type of defense mechanism against the invasion or intrusion of animals is not always successful, due to various factors such as not knowing for certain what kind of wildlife is causing damage to the reforestation or not knowing how to properly install the chosen defense method.  On one hand, it is known that not all fencing is an effective barrier against all animals for the protection of plants.  An example of this is the case of rabbits and hares.  One can install tall barriers and fences to keep out large animals such as deer and roes and even to prevent the intrusion of people who might vandalize fruit, seeds, or growing plants, but what about smaller animals?

The fauna of the place prevents a good reforestation

Even though plastic sheets or wooden panels are put up to make a tall and ample fence, there are animals that can surmount this obstacle.  And they do not surmount it by jumping over it.  For instance, rabbits and hares can get past a wooden or metal fence by digging out just enough to get under it.  Don’t forget that these animals live underground in borrows that they themselves dig out.  It can also be the case that these little animals get through what is supposed to be the protection of plants and into the area of reforestation  by the use of their teeth.  The teeth of hares and rabbits are sharp and hard.  If the fences aren’t being checked for any possible access point or damage caused by the gnawing that these animals do, then they could very easily at any time slip through this supposedly impenetrable barrier.  With respect to larger animals, a very robust fence is required given that the weight and strength of these animals can over time loosen a poorly installed wooden or metal fence.  Another way of dealing with the wildlife of the area, or with animals that are to be found in the vicinity of the reforestation area, is with pesticides.

The protection of plants in reforestation

is a task that requires time and dedication, especially if dealing with truly large tracts of land.  The larger the tract that is to be repopulated with trees, the greater the objective and accomplishment will be, but the cost of the project and the maintenance that will be required will also be greater.  The construction of fences with boards or fencing wire can turn out to be quite expensive for large tracts of land and, if electric fencing is contemplated, the cost will be even much more.  In addition to this, it must be taken into account that this type of installation needs to be checked regularly in order to be maintained adequately and to replace damaged parts as necessary.  In the case of plastic or wooden sheets, it is necessary to take water runoff into account when building the fence so that rainwater won’t dam up behind the sheets and flood the reforestation area or pool in large areas.  This could result in smaller plants drowning or plant disease developing from the trapped water or from the humid conditions.  Pesticides can be another form of protection for plants in a reforestation project but be aware that pesticides can contaminate the soil or the plant itself as a result of some chemical agent in its composition.

The best mechanisms for the protection of plants in reforestation

¿What other defense methods are there for the protection of plants in a reforestation project?  What happens when an animal does manage to get inside the reforestation area?  What happens when it’s birds that you’re dealing with?  When the perimeter defense fails there is another defense for this situation and it is known as “individual protection.”  Of what does this protection consist?  As the name suggests, individual protection seeks to safeguard a single individual against a hostile external agent.  In this case, the protection of a single plant is accomplished by the use of netting as an individual guard according to what is needed.  This method of protecting reforestation plants can be complete or partial.  The first has the intent of protecting the plant from the root to the tip by  means of the use of netting or something similar, while partial protection only intends to protect a certain area of the plant which is vulnerable to the damage that is being done.

The area to be protected can be the bark, roots, or the stem, in order to avoid the damage caused by the teeth of rabbits, hares, and deer or by the horns of deer rubbing on the bark.  It may also be necessary to protect the leaves of younger plants so that they do not get eaten by the aforementioned animals or others depending on what wildlife is to be found in the area undergoing reforestation.  Partial protection can also be used to keep birds from making off with seeds or fruits from the plants.

Protection of plants in reforestation avoiding hunting and trapping.

It is important to keep the reforestation project under constant vigilance in order to ward off any possible outbreak of plant disease or any health issue that the plants might come down with.  Regular checkups of the individual guards and perimeter fencing  is also necessary.  Not being up to date about possible faults in the protection of the reforestation plants (poorly placed guards, animal damage, bad installation, deterioration caused by weather or the passage of time) can lead to the problem becoming irreparable.  When dealing with individual guards, keep in mind the kind of plant that is to be protected before buying the guards.  Many times clients find that the guards become embedded in the bark of the trees, causing irreparable damage during their growth, or that the guard has deformed the plant being protected.  This usually is not the fault of the product but rather is the result of two factors.  The first is incorrect installation.  The second is using the wrong kind of guard for the plant being protected.  These problems can be avoided if it is kept in mind that some plants grow more rapidly and become bigger than others, which means that not all guards are appropriate for all plants. 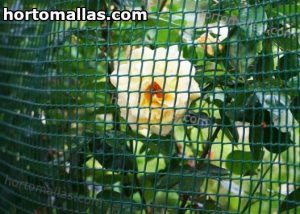 Caring for and the conservation of the environment is a task we should all take seriously.  Here, the use of netting.

Reforestation is a practice which in the long term results in a number of important benefits that help the ecosystem as well as us ourselves, since forests help to regulate contaminants in the air and water as well as to stabilize weather and produce essential nutrients for the soil.  These and many other factors and benefits which are provided by reforestation can only be achieved if the care and upkeep of these areas are carried out carefully and with some effort.