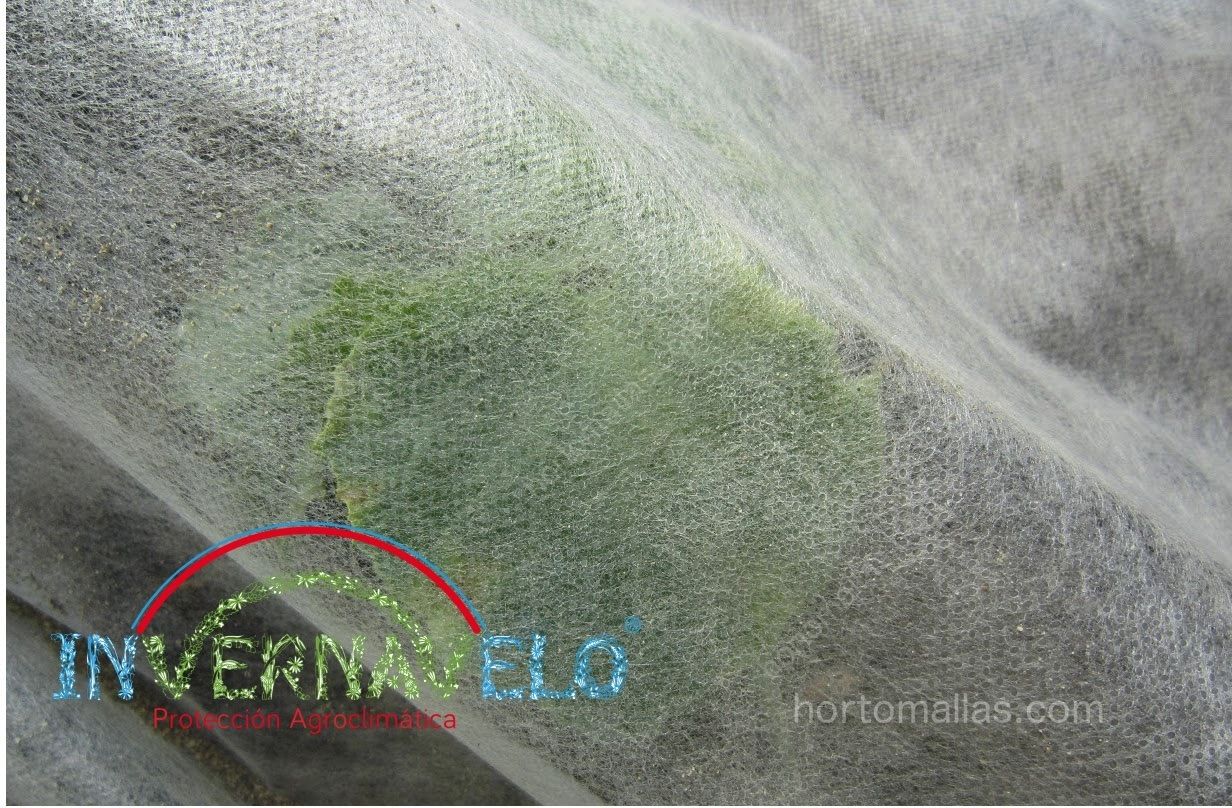 Installing the frost blanket directly on top of the recently planted row increases yield at the end of harvest.

Protection against Cold Weather and Frost

INVERNAVELO is the frost blanket made from nonwoven polypropylene that is used as a protection for vegetable and tree crops during the brief but devastating frosts of fall and winter.

With a frost cover you can prevent the total loss of what you planted because of brief freezes of down to 5 degrees below zero (23° F).  This blanket creates a thermal buffer, capturing heat stored in the ground, which is a thermal mass heated by IR rays during the day.  This radial value gets returned to the atmosphere during the night. INVERNAVELO essentially traps this thermal delta and does not allow it to return as rapidly, creating a thermal difference of several degrees.  This is enough to save the crop, having created the effect of a greenhouse.

As a frost shield

This frost blanket prevents direct contact with nighttime dew.  As the night passes, dew comes into contact with plant tissue of the vegetables and their plants.  This moisture, as the temperature falls and drops below zero (32° F), ends up freezing and consequently the fruits and leaves do too.  With a frost blanket installed acting as a shield, this moisture remains on top of the fabric without coming into contact with the plant.  When the temperature drops below zero (32° F), the frozen water remains on top of the fabric without harming the plants.

Obligating crops with the nonwoven INVERNAVELO

Every farmer, and especially produce growers, know that getting to the market with one week’s difference in regards to the competition, can mean unexpectedly high earnings.  To the contrary, getting to market late sometimes obligates one to abandon the harvest or deliver it to livestock because harvesting costs more than what the market pays.  Being able to create this ideal microclimate along the rows which manages to force the seed and seedling by heating the soil and trapping the warmth in this thermal mat, permits advancing to the vegetative stage at a time when those who do not use this technology still do not trust planting or transplanting.  These types of advantages allow the grower who uses INVERNAVELO to uncover the plants when the weather is warmer and the plants are blossoming, and are ready to host pollinating insects or to be pollinated by the wind.  The one who plants without this frost blanket will barely have started planting when the plants under INVERNAVELO are at this stage.  This grower will arrive at the market along with the vast majority and will be fighting to find a buyer while the grower that uses INVERNAVELO will now be preparing land for the next crop cycle.

This fabric permits evaporation and the passage of air, but acts as a very efficient barrier against insects, given that not even the whitefly will be able to get past it to the row that is covered and protected by INVERNAVELO.  By preventing plants from attracting thrips and whiteflys, which cause viral diseases by transmitting them through physical contact, and by tying this together with the fact that we are advancing growth by several weeks, means that we are saving agrochemicals, producing organically, and harvesting at a time when the market is fighting for our produce.

Upon installing the INVERNAVELO frost blanket the length of the row (be it using sticks, a system with twine, trellis netting, wire, or U-shaped bars inverted over the row), the plant or seedling is protected from the devastating effects of heavy rain, or, even worse, torrential rain when the weight of the water knocks down the leaves or bends over the plant putting it into contact with the ground and thereby exposing it to fungal diseases.  The wind can also cause this kind of damage to plants left exposed to the elements. The fabric of the INVERNAVELO row cover acts as a windbreaker and as a shock absorber for raindrops or hail that can fall with great velocity during a storm.  Nevertheless, once on the fabric, the rain can pass through and help us with its moisture to bring vitality to the plant.

INVERNAVELO as a means for saving irrigation water

Finally, it is necessary to mention the properties of the INVERNAVELO frost blanket in regards to its capacity to keep just the right amount of moisture trapped so that the plant will develop without the development of fungi.  Especially in arid areas where water becomes scarce, covering the rows with this fabric will help in maintaining a relatively optimal moisture level for crops like tomatoes or cucumbers that need it.