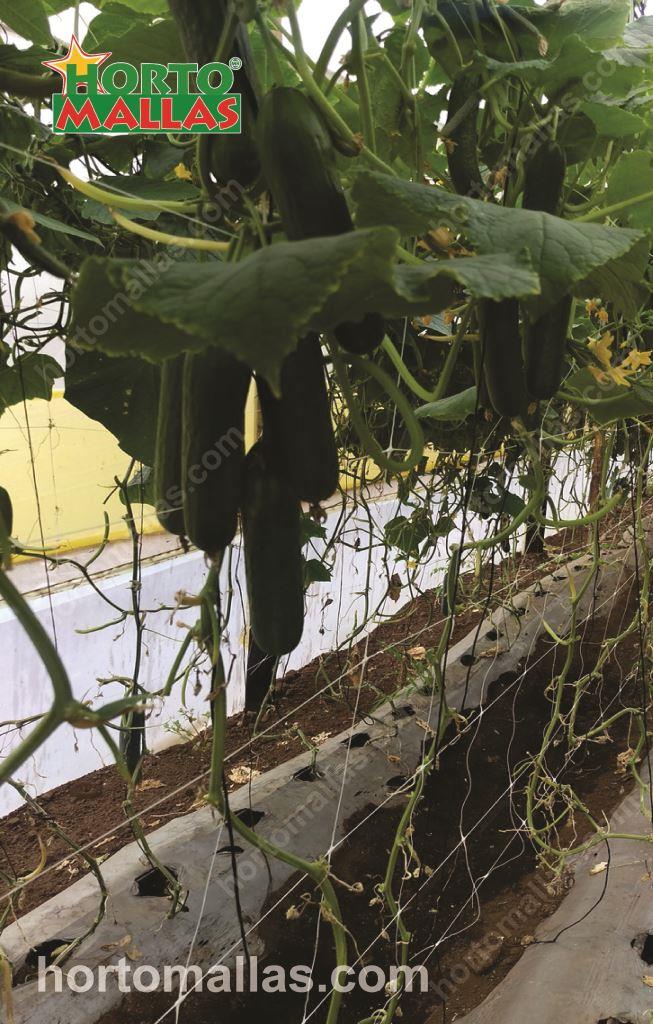 Trellising was evaluated for its effects on yields of cucumber (Cucumis sativus L.) cultivars Dasher II, Marketmore 76, and PetoTripleMech at Lane and Wilbutton, Okla. Trellising improved total and marketable yield at both locations compared with ground culture. `PetoTripleMech’, evaluated as a fresh-market cultivar, produced yields equal to, or higher than, the other cultivars. Average marketable fruit weight was not affected by trellising but was affected by cultivar at Lane, with `PetoTripleMech’ having the heaviest fruit. Economic analysis indicated that trellising is a viable management system for small-scale cucumber production.

Trellising was evaluated for its effects on yields of cucumber (Cucumis sativus L.) cultivars Dasher II, Marketmore 76, and PetoTripleMech at Lane and Wilbutton, Okla. Trellising improved total and marketable yield at both locations compared with ground culture. ‘PetoTripleMech’, evaluated as a fresh-market cultivar, produced
yields equal to, or higher than, the other cultivars. Average marketable fruit weight was not affected by trellising but was affected by cultivar at Lane, with ‘PetoTripleMech’ having the heaviest fruit. Economic analysis indicated that trellising is a viable management system for small-scale cucumber production.
Fresh-market cucumbers are hand-harvested several times during a season. Trellising has been suggested to increase harvesting efficiency in cucumber while improving yield by reducing damage to vines and improving net photosynthetic rate (Hanna and Adams, 1984;
Konsler and Strider, 1973; Swingle and Mullins, 1976). Although combinations of twine and wire or wire alone were used to support the plants in the foregoing studies, wire exposed to direct sun can bum cucumber plants (Baker, 1977). Since these reports were published, new trellising materials (reusable, unknotted, woven nylon mesh), cucumber cultivars, and cultural methods (bedding and mulching with black plastic) have been developed. To the best of our knowledge, there is no information concerning the response of cucumbers grown with trellises on raised beds, drip irrigation, and plastic mulch.
This study was designed to determine if trellising, in combination with improved cultural practices, could increase yield of selected cucumber cultivars relative to  unsupported plants.
Cultivar trials (Makus, 1986; OSU, 1988) andan economic assessment (Schatzer et al., 1986) suggest that cucumber has potential for increasing economic return to producers. The previous studies, with various trellising methods, assumed that the cost of trellising would be compensated for by improved yield. However, these assumptions were not tested.
Therefore, a second objective of this study was to examine the economic feasibility of trellising for fresh-market cucumber production.
Experiments were conducted concurrently
Received for publication 1 Oct. 1990. The cost of publishing this paper was defrayed in part by the payment of page charges. Under postal regulations, this paper therefore must be hereby marked advertisement solely to indicate this fact.
on a Bernow fine sandy loam (thermic Glossic Paleudalf) at Lane, Okla., and a Counts silt loam (thermic Albaquic Paleudalf) at Wilburton, Okla. Preplant fertilizer appli
cations were 56N-62P-155K kg·ha-1
at Lane and 200N-77P-22K kg·ha-1
at Wilburton. Additional N, 17 kg·ha-1
at Lane and 45 kg·ha-1 at Wilburton, was added in one application through the drip irrigation system during the fourth harvest week. In all cases,urea was the N source. The gynoecious slicing cultivar Dasher II and the monoecious slicing cultivar Marketmore 76 were compared. In previous observational trials (1989) in Wilburton, the gynoecious cultivar PetoTripleMech, primarily used as a pickling cucumber, produced fruit of a size, quality, and quantity that would allow it to be considered as a slicing cucumber. For these reasons, ‘PetoTripleMech’ was included in this study to evaluate its performance against established slicing cultivars.
Beds
(≈20 cm high, 6.1 m long, 76 cm wide) were formed on 1.8-m centers. Drip irrigation (0.38 mm, 30.5-cm orifice spacing) and black plastic mulch (0.025 mm thick)
were applied concurrently. Holes were punched through the mulch and seed planted on 46-cm centers in a single row per bed on 26 May 1989. Plants were reduced to one
per hill, 1 week after emergence. Woven, reusable, unknotted, nylon trellis netting was attached to two steel T-posts, one on each end of the
plots, at a height of 1.5 m. The experiment incorporated a factorial design (three cultivars and two trellis treatments) in randomized blocks with eight replications at Lane
and six at Wilburton. Although randomization caused trellised and ground culture plots to sometimes be adjacent to each other, effects of shading were minimal since plots
were 1.8 m apart arranged in an east-west orientation at both locations. Ground culture guard rows surrounded the field at both locations. Because harvests were not neces-
sarily made on the same days at both locations, totals for harvests in a week, instead of each harvest, are reported for both locations for 6 weeks (10 July to 12 Aug.). Fruit were graded in accordance with the U.S. Dept. of Agriculture standards (U.S. Dept. Agr., 1958).
Total and marketable fruit (U.S. grade no. 1 and better) yields were recorded. Fruit were considered to be unmarketable if noticeably damaged (including disease). Analyses of variance were performed for each measured variable, using General Linear Models procedures of the Statistical Analysis System (SAS Institute, Inc., Cary, N.C.). Mean
separations were performed using Fisher’s LSD. There were differences in total and marketable yields due to cultivars at both locations (Table 1). ‘PetoTripleMech’ and ‘Dasher II’ produced the highest total yields at Lane and Wilburton. The highest marketable yield was produced by ‘PetoTripleMech’ at bothlocations. ‘Dasher II’ had higher marketable yields than ‘Marketmore 76’ at Wilburton, but not at Lane. Total and marketable yields for all cultivars at Wilburton were consis