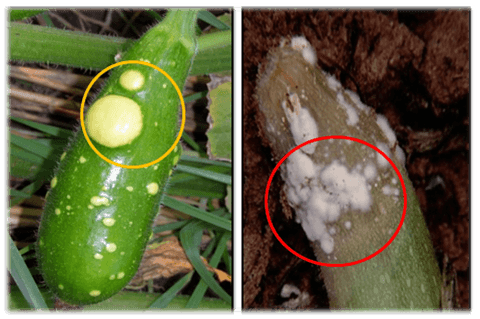 Zucchini crops can be grown organically with HORTOMALLAS

The scientific name for the zucchini squash is Cucurbita pepo, and many common crops which include the summer squash, pumpkin, pattypan squash, acorn squash, and the zucchini are actually just different cultivars of this one species. It can be either an annual or perennial plant and is highly sensitive to icing and cold damage, which also increases its susceptibility to infections from various diseases and plagues. One method of reducing the probability of having your zucchini plant infected by a disease is to use squash support netting or trellis net to help the plant grow.

Because both the fruit and the flower of the gourd plant are almost always in high demand on the market, it is usually in the interest of the agriculturist to sow a cultivar of this crop that he knows will be in high demand at the time of harvest. Knowing the specific taxonomic description is a very important part of knowing the specific needs of your crop and will be covered in the later half of this article, as the recommended preventative measures to increase the harvestability is applicable to all of the squash plants, whether that be the acorn squash or the zucchini.

The zucchini is an annual plant of indeterminate growth, whose growth pattern takes on the form of a creeping vine (or coiling tendrils). The root system is formed by a principal taproot which will grow downwards to a far greater length in comparison to the secondary roots, which will grow spread out near the surface of the soil. Adventitious roots will grow between the knots of each stem when they come into contact with humid soil. The main stem will grow secondary roots which will end up atrophying if pruning is not done in a timely manner to branch them into two or more arms.

The zucchini plants stem will grow sinuously, easily reaching a meter or more in length, depending on the commercial variety that was sown. The stem is cylindrical, comparatively thick, with a hairy surface that is rough to the touch. The stem has short nodes from which leaves, flowers, fruits, and numerous tendrils will bloom from. The tendrils that form from the stem are usually thin, from 10 to 20 centimeters in length and will grow next to the peduncle of the fruit. The leaves of the zucchini are webbed, with wide blades that have 5 pronounced lobes and a toothed margin. The upper leaf is hairless, while the underside is rough and covered in short, pointy hairs that follow the veins of the leaf. The primary veins will split from the base of the leaf and head towards each lobule, subdividing once the veins reach the edge of the leaf. The leaf has a coloration that will oscillate between light green all the way to dark green, depending on the cultivar of zucchini that was chosen, with small white spots that will occasionally appear. The leaves of the zucchini plant are suspended by long, strong petioles that happen to covered in rigid and strong hairs.

The flour of the zucchini plant is monoic, which means that the same plant will have both masculine and feminine flowers. The flowers are solitary, colorful, axillary, large compared to the flowers of other plants, and flare out like a trumpet. The calyx are zygomorphic (they only have one plane of symmetry) that consists of 5 green and pointed sepals. The corolla is actinomorphic (it has a star like or radial pattern of symmetry) and is made of 5 yellow petioles. The feminine flowers will be attached to the stem by a short, thick stalk that has an irregular pentagonal or hexagonal cross section, while on the other hand the male flowers will have a larger stalk that can reach a length of over 40 centimeters. The ovary of the flower will usually be placed low on the feminine flower and is tri-carpeled, tri-locular, and elongated. The 3 stigma are joined at the base and are free up the their junction with the stigma, which is divided in 2 parts. The masculine flowers have 3 unified stamen.

The zucchini fruit is a fleshy pepo without a central cavity, of variable color, with smooth stretched and reticulated skin. The zucchini fruit is harvested approximately halfway through its normal growth period; the ripe zucchini fruit is not marketable because of the hardness, large size, and quantity of seeds that will eventually form inside the fruit. The seeds of the zucchini plant are a yellowish-white color, are oval, elongated, have a pointy end, are smooth, and have a longitudinal groove that is parallel to the outer edge of the seed. The normal thickness of the seeds are usually roughly around 1.5 cm in length, have a width of about 0.6 to 0.7 cm, and have a thickness of approximately 0.1 to 0.2 centimeters.

The current market for zucchini is in high commercial demand, but is also highly selective on the quality and selection of fruit that is brought to market. Because of this, the agriculturist who chooses to grow zucchini needs to take preventative measures to protect his crops for various diseases and plagues, especially since the current environmental conditions have seen an increase in the spread of various diseases that harm the zucchini.

The most common diseases and plagues that affect the cucurbit family are: the corn rootworm, jumpy flea, leafhopper, whitefly, greenfly, vegetable leafminer, and the cabbage looper moth (amongst various others). These plagues make the economic investment needed to grow the zucchini higher than normal because of the need to combat these plagues as they increase every year. This is one of the areas where the cost benefit of various protective actions will be measureable. Of course, this is speaking only of insect plagues, but the zucchini also has a weakness to viral, bacterial, and fungal pathogens that are waiting for the chance to be transmitted by various vectors.

One of the very significant challenges facing agriculturists today is the fact that plagues and diseases have steadily increased their resistance to agrochemicals that have been used to exterminate them in the past. When you are growing zucchini, a great deal of attention should be given to any disease that you find, making sure to determine which pathogen is affecting your crop. Some common examples of fungal diseases that affect zucchini are mildew, powdery mildew, fusarium, and anthracnose. In general, the zucchini plant is a species of plant that is highly susceptible to airborne fungal diseases. Fortunately the zucchini plant is fairly resistant to diseases that are caused by soil-borne fungi such as Fusariosis, which causes rot in the neck and base of the stem of the zucchini plant, caused by the Fusarium solani fungus.

The majority of fungal diseases that infect the zucchini plant can be prevented by planting your zucchini crop under HORTOMALLAS crop support netting. This crop support netting will allow your crop to grow upwards rather than horizontally, preventing most of the plant from coming into contact with the ground, including the fruit which will hang from the crop support netting. This vertical growing of your crops has numerous benefits to an agriculturist that will both make growing your crop more efficient. By having the crop growing up vertically rather than horizontally, high concentrations of humidity don’t have a chance to form, avoiding one of the largest causes of infections in plants. Having your zucchini plant growing vertically will also allow your plant to grow with an distribution of leaves that allows it to optimize the amount of solar light that it can absorb. The vertical growth also allows workers applying agrochemicals to be significantly more efficient in their application. Because the fungus that causes mildew prefers soil to be dry with a certain amount of ambient humidity, it is recommended that you avoid letting this contagion affect your crops by not letting the soil become dry between irrigation cycles.

When the fruit of the zucchini is ready to be harvested, workers should take care not to twist or pull the fruit off of the plant, as this will cause undue damage to the plant. Instead, the fruit should be cut once it is ready to be harvested. A badly harvested fruit, one that was twisted or pulled off produces defects in the quality of the plant which will promote the root causes of rot. When the harvest is performed carelessly and without following the normal agricultural practices, damage to the plant is easy to find, usually in the form of compression, bruising, or abrasions. These damaged locations provide the perfect place for a bacterial, fungal, or viral infection to take place and cause significant disease in your plants. We recommend that you use HORTOMALLAS trellis netting  because it will not only reduce the cost of your manual labor, but it is also reusable for several harvesting cycles, making the collection of fruit more efficient for several seasons.