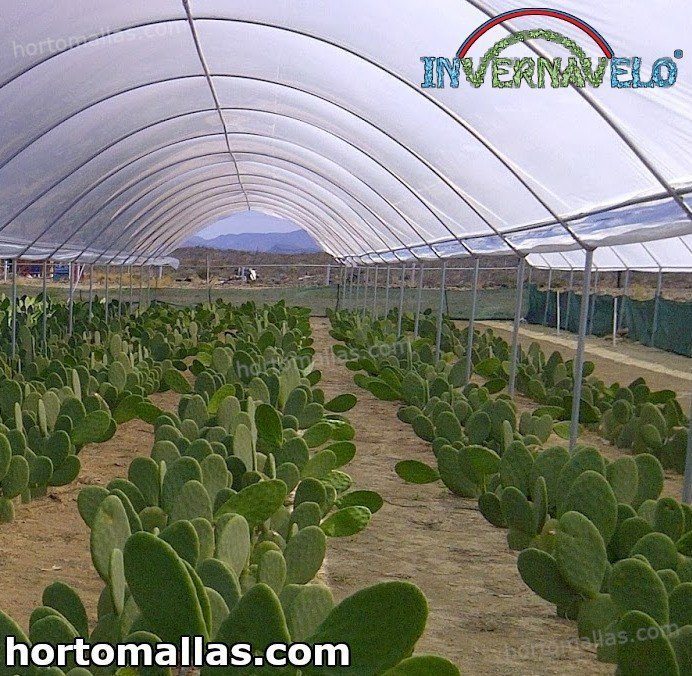 The Nopal crop in Greenhouse allows for the optimal growth of plants and fruits.

The nopal, Opuntia ficus, is an arborescent cactus, original from Mexico, widely cultivated in all tropical countries and in tempered zones, including the Mediterranean basin.

The fruits of the prickly pear are recognized throughout the world and are used both in human nutrition and in the feeding of livestock. Lately its benefits for medicinal uses have been discovered. It’s optimal development occurs with optimal exposure to the sun and with adequate protection against insects, wind and frost.

Thanks to the INVERNAVELO mesh, new generation nonwoven woven plastic mesh; the attacks of some insects are prevented. For example, the fruit fly, the cochineal and the moth deposit their eggs in the fruits during ripening, ruining them completely.

Many common Nopal diseases are reduced thanks to the INVERNAVELO mesh.

Invernavelo protects from the cold but it does not limit the penetration of the sun’s rays.

If the plant does not flower and assumes strange forms, it stretches and turns a light green color; meaning that there is just little light. With the anti-freeze fabric, this risk does not occur. If the green parts are bleached and appear as “emptied” it is usually due to insufficient irrigation.

The plant exhausts all the water contained in the tissues and then seems to empty. The Micro Tunnel of INVERNAVELO avoids water loss and it maintains a developing environment at constant temperature and humidity values.

If the green parts begin to appear golden, as if the plant had burned and small divisions are noticed, it means that the temperatures are too low.

Remedy: Place the INVERNAVELO thermal blanket as protection against frost. Especially at the delicate moment of transplanting the Nopal plant.

When the plant netting reaches 5-10 cm in height, they are transplanted to the pots. But you have to be careful to avoid the risk of frost because they are still sensitive to low temperatures

The nopal has a long juvenile phase and the young seedlings grow slowly. Its fruiting begins after 2-3 years and the complete production phase not before the seventh year.

Parasites can be so aggressive, frequently causing fruit loss.

Avoid the excessive use of antiparasitic agents and promote the use of nonwoven and woven INVERNAVELO fabrics.

If white patches are observed, like a kind of cotton balls that rest on all the green parts of the plant, the pillbugs have infested the crop. Pillbugs cause damage similar to the aphids, by sucking the sap from cactus plants and stunting the growth of plants, which can lead to the decomposition of the stem or the whole plant. These parasites expel the honeydew, which attracts other parasites, such as ants. In some areas, the Nopal crop in greenhouses is grown to make the pillbugs colonize. In fact, these insects serve to produce a natural dye that is used in many foods, in cosmetics, and in the textile industry.

Caterpillars are one of the most common parasites that feed themselves on this plant. Adults have black and red marks. They feed on the younger parts first, infesting the stems of the plant. These parasites slow down the growth of the plant and can even kill it.

Mesh against insects, bugs, aphids and thrips, as well as dominant pests of both the cactus and nopal crop.

These small parasites reproduce quickly and cause very damaging infestations. The aphids feed on the sap of the nopal, which causes the plant to decrease in size. If the infestation is already severe enough, the whole plant drifts or dies. In addition, aphids excrete large quantities of honeydew, a sweet and watery substance that attracts not only other pests, but also other animals. Thrips are other small and thin parasites that can go away thanks to the INVERNAVELO mesh. The thrips suck the Nopal juice and leave the stems with a silvery and mottled appearance. Severe infestations cause stunted growth and damage to flowers and developing fruit.

The Nopales grow in full sun, so the exposure should be as sunny as possible. The cactus is very sensitive to cold. It can be cultivated in the soil only where the winter temperatures do not fall below -10 ° C.

Consequently, in places with severe winters, Nopal crops in Greenhouses or Microtunnels are better off. The INVERNAVELO thermal blanket has the advantage of being a floating cover that can be placed during cold temperatures and removed when they are not needed. When the growing season returns, plants can gradually be exposed to intense heat and light. INVERNAVELO favors the passage of light and air. It is also advisable to provide a suitable substrate to avoid problems related to stagnant root moisture.

To maintain the ideal microclimate, the cultivation of Nopal in Greenhouse and Microtunnel is recommended.

Unlike plastic tarpaulin, which needs to be closed and opened several times to prevent moisture formation, the non-woven woven mesh allows perspiration and allows the passage of rain and air.

How can we protect plants that are sensitive to frost?

Creating a structure of protection against the cold with INVERNAVELO, non-woven fabric.

INVERNAVELO provides effective protection against frost. With this breathable non-woven fabric it is possible to cover the entire plant and it is fixed by inserting the limbs under stones or from the same pots.

The riskiest period for a plant is the cold season.

How should non-woven fabric be used? When should the plants be covered?

It is important to anticipate the times, because a structure that maintains an environment in which the plant is placed and it is too hot, inhibits its acclimatization.

In other words, it is “a hoax”. If the plant has a temperature of 30 ° C (86 ° F) with the October sun, it will think that it is still summer and will continue to vegetate, which will prevent the beginning of all those processes that correspond to the preparation for winter and the risk of bigger “posterior colds”.

At night, they retain the heat that by radiation would disperse, creating a milder environment with minimum temperatures even higher than a few degrees.

It is important not to wrap the plants directly, especially if it is evergreen. The non-woven fabric, in fact, retains moisture and if it were in direct contact with the leaves, it would keep them much moister than the leaves in contact with the air. This, combined with more thermal changes, would burn the leaves and weaken our plants more than it would occur with unprotected plants.

The effect would be even worse if instead of non-woven fabric, we used other materials.

So, how should non-woven fabric must be used?

It is necessary to create a Microtunnel, for example, using bamboo poles or metal supports, around the plant you want to protect. This “skeleton” must be far enough away from the leaves and must define a space that is not too narrow.

Around it, “roll” a couple of layers of INVERNAVELO, fixing them with clips to the support posts.

It is important that the cover starts from the bottom of the plant and is not open at the top. In fact, the heat is transferred from the ground to the upper part and, if it could spread laterally or come out from above, it would not bring the least advantage offered by this protection. It must be avoided that the sheets are in direct contact with the non-woven fabric.

What advantages are obtained with an INVERNAVELO nonwoven fabric cover?

A structure made with the thermal blanket has the advantage of creating a more protected environment, protecting against wind, rain and snow.

However, the internal temperature is noticeably higher only during the day with the sun beating against it, generating a greenhouse effect.

The differences in the minimum temperatures between the interior and the exterior are often insignificant, since during the night the cooling is fast and even if the dispersion of heat through the nonwoven fabric is attenuated, the internal temperature is balanced with the external.