Mechanical stress reduces plant yield, physical disturbance of plants or plant parts results in a response from the plant will increase the incidence of diseases. Mechanical stress applied naturally or under controlled conditions inhibits growth in mass and dimensions of major plant parts. Wind and precipitation are important natural sources of mechanical stress. Under field conditions, cultivated plants experience these natural mechanical stresses plus those caused by irrigation and contact with farm machinery or workers during cultivation.  Some horticultural practices, such as staking of trees or potted plants, pinching or pruning stems, deadheading flowers, bagging potted plants, or training branches, are mechanical stresses that affect plant growth. Handling practices in plant science research, such as cross-pollination or tagging of flowers (Frizzell et al., 1960) or repeated attachment of leaf chambers for measurement of water status or photosynthetic rates (Marler and Mickelbart, 1992), also can affect plant growth and physiology. 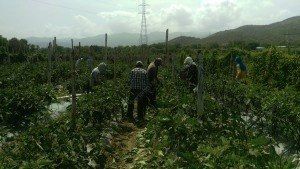 Pruning and tutoring with raffia twine will cause plants to suffer from mechanical stress.
Grace (1977) extensively studied effects of wind on the growth and physiology of grasses. Jaffe (1973) termed plant response to tactile (touching, rubbing, brushing) mechanical stress “thigmomorphogenesis,” whereas plant response to a nontactile (shaking, vibration, wind) treatment was termed “seismomorphogenesis” by Mitchell et al.
(1975). However, only recently has plant response to mechanical stress been studied to control plant growth in controlled environments, such as greenhouses and growth
chambers (Beyl and Mitchell, 1977b; Hammer et al., 1974)
Long-term effects on yield
Mechanical conditioning usually affects plant growth only during the period of treatment, plus about a 3-day recovery period,which makes it a desirable growth control
treatment for vegetable transplants. However, there have been reports of long-term treatment effects on yield. Under greenhouse conditions, daily shaking during vegetative and reproductive growth phases decreased tuber weight of potato (Solanum tuberosum L.) without affecting the number of tubers produced (Akers and Mitchell, 1985). Similarly, daily shaking of ‘Patio’ tomato during vegetative and reproductive development delayed anthesis but improved fruit set (Akersand Mitchell, 1985). Twice-daily shaking of tomato plants during fruit production in the greenhouse reduced yields 18%, but shaking on alternate days did not affect yield (Buitelaar, 1989). Brushing potted soybean during various periods of vegetative and/or reproductive development did not affect seed yield (Umezaki and Matsumoto, 1990).
Few long-term effects are expected from mechanical conditioning of transplants sincere productive tissues generally are not treated. Brushing lettuce seedlings only during transplant production reduced the size and improved the handling characteristics of the transplants (Wurr et al., 1986). However brushing did not affect lettuce head weight
at maturity in the field. Brushing or wind treatment of broccoli transplants during their production in the greenhouse had no effect on subsequent head weight during field production Latimer, 1990). Brushing increased subsequent root yield from sugar beet (Beta vulgaris L.) transplants, but excess growth inhibition of transplants caused a corre sponding yield decrease (Takaki et al., 1977).
Brushing tomato transplants before setting them in a cold (9C) greenhouse reduced early, but not total, yield (Pardossi et al., 1988). In contrast, brushing tomato transplants subsequently set in a warm greenhouse had no effect on early or total yield (Johjima et al.,1992).
These differences in yield response to mechanical stress again may be due to differences in cultivars or species. However, the lack of detail in many published reports prevents determination of the developmental state of the transplants at the time brushing ceased. Brushing can physically damage reproductive structures such as tomato flowers (Johjima et al., 1992) that may be present during the latter stages of treatment. Physical damage to flowers could contribute directly to decreased early yields such as those reported by Pardossi et al. (1988). However, brushed ‘Ritsurin’ cucumber had comparably reduced yields over the entire harvest period, whereas the yield of three other cultivars was unaffected by transplant brushing Latimer et al., 1991). Both the physical and physiological long-term effects of mechanical conditioning must be more adequately defined.
Disease incidence 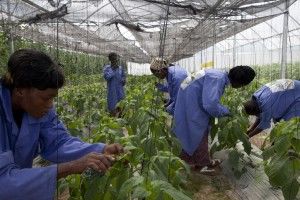 Handling plants during tutoring with raffia will spread pathogens mechanically like any insect, at an exponential rate. Mosaic virus or fungi will use the hands of the workers as vectors. ALways use HORTOMALLAS to let your plants tutor naturally without the need of labor and prevent deseases that will cause you economic losses.
Another potential problem that must be addressed is the effect of mechanical conditioning on disease incidence and spread.
Mechanical procedures such as clipping, pruning, or taking cuttings may promote disease spread by dissemination of pathogens. Although we have observed no disease incidence in our studies with brushing, it would be prudent to assume that brushing also can spread pathogens. Therefore, we have recommended that any diseased plants be culled before brushing and that plants be treated only when the foliage is dry (Latimer, 1991).
Brushed plants have been shown to be more susceptible to infection than are untreated plants. When tomato transplants previously inoculated with Fusarium oxysporum
[Schlechtend.: Fr. f. sp. lycopersici (Sacc.) Snyder & Hans] were brushed for 14 days, incubation time for the disease was reduced and symptom expression was more severe
than for plants not subjected to brushing (Shawish and Baker, 1982). Flax  (Linum usitatissimum L.) and pea seedlings exhibited similar responses to their respective
Fusarium pathogens. In addition, in a test using a limited sample size, cuttings taken from tomato plants that had been brushed for 5 days were inoculated, rooted, and trans
planted into pots. When evaluated 50 days later, cuttings taken from brushed plants had more severe symptom expression than those from unbrushed plants.
Additional research is necessary to determine how mechanical conditioning would predispose seedlings to infection by Fusarium wilt pathogens, the reason for the persistence of this predisposition, and the susceptibility of treated plants to other plant pathogens. Non tactile forms of mechanical conditioning, like shaking or exposure to
wind, probably will have little effect on disease spread. However, the effect of the treatments on predisposition to disease may be the same as for brushing. Mechanical conditioning affects the hormone balance inplants, particularly with respect to root-produced hormones (Beyl and Mitchell, 1983;Suge, 1978), which also may affect plant
susceptibility to disease. The longevity of these hormone responses and their impact on disease predisposition is unknown. 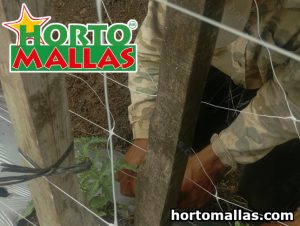 It is recommended that before installing either lattice net or raffia, prune weeds or prune cuttings to avoid spreading any disease.
Mechanism of response
The generality of plant response to mechanical stress in the absence of gross physical damage has prompted many studies on the physiological effects of these treatments
on plants. However, the mechanism of the mechanical stress response still is unclear. Recently discovered “touch-induced genes” in Arabidopsis have added a new dimension to mechanical stress research (Braam and Davis, 1990). Three of five genes identified encode calmodulin and calmodulin-related proteins. Jones and Mitchell (1989) found that calmodulin antagonists partially negated the growth inhibition of rubbed soybean hypocotyls, which supports a role for calmodulin and Ca in the mechanical stress response. The interaction of these systems and their effects on whole-plant growth and physiology presently are unknown.
On a whole-plant scale, the role of plant growth regulators in response to mechanical stress is unclear. Ethylene has been implicated in many mechanical stress responses
(Biddington, 1986). Responses to mechanical stress may involve an interaction between auxin and ethylene (Erner and Jaffe, 1982; Mitchell, 1977). However, studies involving the application of ethylene or inhibitors of its production prove that ethylene does not account for all plant responses to mechanical stress (Biro and Jaffe, 1984; Takahashi and Jaffe, 1984; Takahashi and Suge, 1980). In brushed cauliflower seedlings, ethylene did not appear to be responsible for any aspects of growth retardation (Biddington and Dearman, 1986). Ethylene production actually may be a result of the regulation of touch-induced gene expression rather than an inducer of gene expression (Braam and Davis, 1990). Mechanical stress also affects the production of growth promoters and inhibitors. Reductions in gibberellin-like promoters, demonstrated for shaken sunflower (Beyl and Mitchell, 1983) and brushed bean (Suge,1978), may be responsible for reductions in stem elongation and leaf expansion. 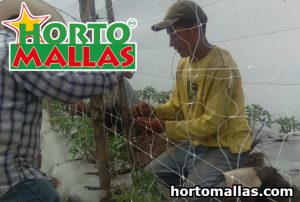 The HORTOMALLAS trellis net offers more benefits such as preventing the spread of diseases because it keeps plants above ground.
Joyce Griffin Latimer
Department of Horticulture, University of Georgia, Georgia Experiment Station, Griffin, GA 30223
http://hortsci.ashspublications.org/content/26/12/1456.full.pdf
Tutoring with HORTOMALLAS trellis netting will reduce the incidence of desease and stress to the plant, which will convert in many tons of extra vegetable production every cycle. The less the plant will be handled during tutoring the healthier it will be and more fruits it will produce.