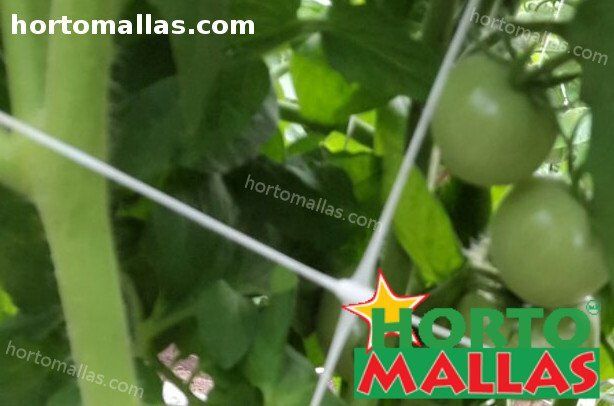 Choosing which tomato training method to use will be based on your personal preferences and the materials you have at hand, this will mostly depend on if you are planning to grow vine or bush tomatoes. Bush or determinate tomatoes grow up to a certain length, which makes methods like caging, or staking, very suitable for training them. In the other hand, vine or indeterminate tomatoes can grow from 6 to 10 feet (1, 82 to 3, 04 m), so they require more cares and constant pruning. Using trellis for tomatoes makes these tasks much simpler and less frequent. Trellises not only keep fruit off the ground, preventing very common infections, but also provide the plant of very good circulation, ventilation and sun exposure, which, as you know, is essential for the fruit develop and makes it ripen faster. Plastic trellises are also perfect if you do not have a lot of space to your disposal or if you simply want to make the most of what you have. Since the plant grows up (instead of around) than can be placed closer than when using other training techniques.

Now, which type of trellising should you use? Again, that will depend on the type of plant you want to grow. If you have determinate tomatoes, horizontal trellising will work well. This would be the same with vine ones, because with this disposition of the trellis it is difficult to prune the plant. Vertical trellising, instead, is perfect for vine tomatoes; all you would need is a structure on which the trellis can be supported. You can use six to eight feet tall (1, 82 to 2, 43 m) metal posts to secure the trellis for tomatoes at each end of the row.

As tomatoes grow they will probably need a little extra support (especially if you are not using a double trellis wall); plastic rings work even better than ties, since they do not choke the plant. They also prevent infections, are easy to place and can be used from a season to another. It would great if you located the rows north south direction, so that sun rays can equally get to both sides of the trellis for tomatoes.

In addition to the already mentioned improvements the use of trellis for tomatoes provides to your production, there are some more: