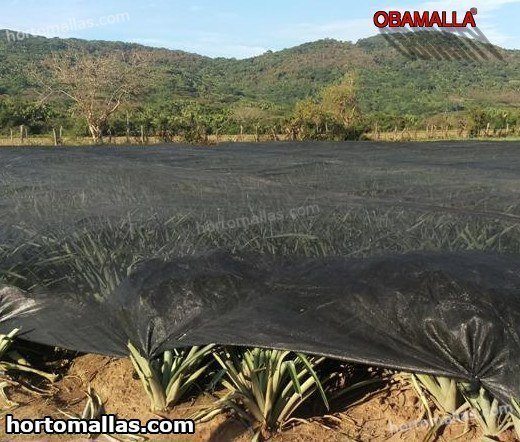 Especially in semiarid climates, where water is scarce and temperatures can be very high, some crops can show developmental problems.  With the objective of reducing the consumption of water and maintaining appropriate temperatures, horticultural shade cloth technology has been developed.

Drought stress is present when the amount of transpired water is greater than the amount of water absorbed by the plant.  The plant certainly can perceive periods of soil drought and synthesizes a stress hormone, abscisic acid.  Another defense mechanism is that of reducing the transpiration area of the leaves.  As a result of these efforts, the plant blocks transpiration, absorption of carbon dioxide, and photosynthesis, which slows down its growth.  In general, plants that are sensitive to the lack of water cannot withstand excessive rises in temperature.  Briefly put, depending on the amount of water absorbed, the plant is capable of adjusting the evapotranspiration temperature, avoiding that it rises too much.  However, if there actually is a lack of water and the temperatures are too high, life itself is at risk for the plant.

Shading as a prevention of damage by intense sunlight

Briefly put, high temperatures can cause serious damage to plants.  Horticultural shade cloth protects plants from heat and prevents drought stress, sunburn, and other damages.  The plants that suffer the most from heat are the ones that have superficial roots.  The fact is that heat causes drought and death of all the plant in a short period of time.  Heat waves cause the water to evaporate rapidly from the soil, even from the deepest layers.  In order to reduce this problem, horticultural shade cloth allows less waste of water because it retains most of the moisture.  Netting for shade has different shading factors so that the maximum appropriate protection can be achieved for each plant and climatic environment.

In a study of a peach crop by the University of Bari in Italy, the effects of modifying the microclimate with respect to functional and productive performance was evaluated.  In the study eight scenarios were compared which were the results of interaction between the following three factors:

The crop was protected with horticultural shade cloth with 30% shading and anti-hail netting with 10% shading.

In summary, these are the eight scenarios which resulted from combinations of the three factors.

5.  Irrigation restoring 100% of evapotranspiration.  Soil worked on a regular basis.

6.  Irrigation restoring 50% of evapotranspiration.  Soil worked on a regular basis.

The main advantages of netting for shade

Thanks to the installation of a system for monitoring soil moisture in real time, it was possible to carry out the irrigating, study the effects of the different nettings on the microclimate, calculate water consumption, and determine stress coefficients on the basis of soil moisture.  During the period of the study (from June to September 2017) horticultural shade cloth produced a one degree centigrade (1.8 Fahrenheit) reduction of air temperature.  It also reduced wind by 43% and diminished overall radiation by 24%. Lastly, it contributed to a 5% increase in the relative humidity of the air.  In general, distinct amounts of water consumption were achieved because of the different microclimates.  Scenario #7 (30% shade cloth, irrigation restoring 100% of evapotranspiration, soil with highly reflective ground cover) definitely is the one that recorded the least consumption of water and total lack of drought stress.

The effect of microclimate modification on yield

The reduction in photosynthetically active radiation (PAR), under the netting for shade, did not limit the plant’s photosynthetic activity.  However, temperature and vapor-pressure deficit, (VPD) were reduced.  Also, the reduction in evaporation was able to maintain the plant’s water potential.  In general, the use of netting for shade with high radiation diffusion in combination with using ground cover, increased the amount of carbon fixation by about 20%.  Additionally, it reduced water loss by 25%.  Consequently, it increased water use efficiency in the fixation of carbon by around 60%.

Thanks to horticultural shade cloth and ground cover, an improvement in production was shown as much from a quantitative perspective as from a quality perspective.  Combination of the two produced 54 t/ha (24 tons/acre) versus 50 t/ha (22 tons/acre) without the two and average fruit weight of 211 grams (7.4 ounces) versus 195 grams (6.9 ounces).  Horticultural shade cloth improves radiation by reducing its intensity and decreasing temperature.

Use of horticultural shade cloth for a crop of tomato cherries.

In particular, the use of pearl colored netting for shade for a crop of cherry tomatoes resulted in consistently increasing yield (122.85% more than with no netting).

Colored shade cloth has been developed in order to improve its selective capacities and to filter sunlight more efficiently.  It is, in fact, capable of modifying the spectrum of filtered light and increase the diffusion of the light.

Thanks to this type of horticultural shade cloth, one achieves greater yields, less stress for the plants, and better harvests in less time.