We present a study conducted by INIFAP (the research division of the Mexican Department of Agriculture) which shows the benefits of espalier net (commonly called cucumber netting when used for cucumbers) such as what is available from HORTOMALLAS.  In this case it is used for growing cucumbers in a technologically intensive system.

Cucumber production aided by the technology of espalier net and the application of soluble fertilizers by means of irrigation water, which results in yields of 90 to 130 t/ha (40 to 58 T/A), helps to diversify and strengthen the agri-food chain of the rocky soils of the Yucatan.

In a greenhouse, espalier net can be installed vertically or horizontally for improved plant development, better air circulation, sun exposure, and decreased incidence of mycosis.

Problems to be solved

Horticulture in rocky soils has been characterized by concentrating on the production of traditional varieties of cucumbers with low yield, little technology, and high exposure to fluctuations in price.  The uncertainty of market price is a limiting factor that becomes a major risk factor, greater than plagues and diseases.  Prices have an economic impact from 25 to 50% of the expected price due to oversupply because of imports and/or because of the concentration of production in certain periods of the year.

Recommendations for its use

This is technology that requires financing and organizing for commercialization by the producers, so that supply gets aligned with demand, preferably with previously arranged buy sale agreements.  It is recommended that hybrids (Turbo, Indio, Moctezuma, Dasher, or Monarch) be planted from September until mid-March with 16,500 plants/ha (1.5 m x 40 cm) [6,680 plants/A (5 ft X 16 in)].  The espalier net, 60 to 67 in in height, is supported by posts or stakes placed every 6½ to 8 ft in the crop row.  The fertigation which is recommended is done using nutritive solutions of 8 milliequivalents (mEq) of nitrates (NO3), 2 mEq of phosphate (H2PO3), and 4 mEq of potassium (K) during the vegetative stage and 5 mEq of  NO3, 1 mEq of H2PO3), and 6 mEq of K during the productive stage, applying the solution 3 times per week during the last hour of irrigation.

Extent of application and type of producer

This applies to the rocky soils of the northern Yucatan and includes small and full-time growers.

The hybrid seeds, horticultural netting, agrochemicals, and irrigation system components can be acquired from local distributors.  At the Henequenera experiment station, this technology is available by means of brochures, talks, consultations, and specialized training. 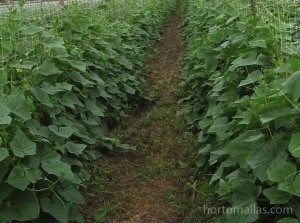 Growing cucumbers on a cucumber trellis, increases yield and reduces mycosis as a result of better air circulation.

The cost per hectare including the total investment in an irrigation system is approximately $ 100,000 (Mexican pesos) [$5,200 USD] for the first crop.   This can vary depending on the material used and the duration of the first crop.  In the case of the espalier net for the cucumber trellis, the cost per linear meter for 1.5 m high horticultural netting was quoted as being between $ 3.50 and $ 2.25 MXN (August 2015).

There is growing regional demand (Mérida, Valladolid y Cancún) for this produce.  Cucumber production on rocky soils is an option of diversification that permits production during six months, thus avoiding that the production drags down the price by concentrating it to a short period.  In addition, six jobs per hectare (2.5/A) are created.  By strengthening the producers’ association, regional, national, and international markets could be accessed.

This technology was developed in the rocky soils of the northern Yucatan and the information is available in two publications:  “Comportamiento y potencial del pepino en suelos pedregosos de Yucatán”. Horticultura Mexicana 8(3)74 and in the brochure for producers, “Producción de pepino con malla para espaldera”.

Trackback from your site.