Growing Cucumbers: a cucumber trellis and how to train cucumbers to it 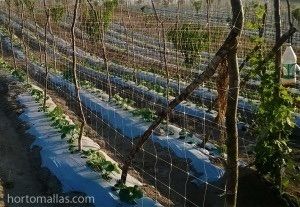 Cucumbers make the use of a cucumber support obligatory.  When the fruit touches the soil, a white area forms at the point of contact that  decreases its commercial value.  When they will be harvested for pickling, a cucumber trellis is optional.  In the United States cucumbers for pickling are grown on the ground in order to be harvested mechanically.  How to go about trellising is explained in detail in the article trellising vegetable crops.

Cucumbers, unlike cantaloupes, do not require special obligatory pruning.  However, at the greenhouse level of production, pruning is done in order to make for orderly growth of the plant and to improve ventilation, especially in the case of the larger slicing varieties.  This is done with ease with a HORTOMALLAS cucumber trellis. 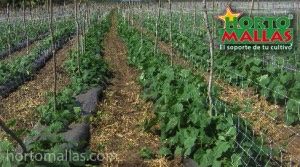 The use of crop netting facilitates training the cucumber and other crops to the trellis.

Fertilization can be done through the soil, especially during the rainy season or when surface irrigation of the rows is used out in the open.  This crop tolerates potassium chloride as a source of potassium, but any other source can also be used, e.g. phosphates, nitrates, and sulfates.

You may try our free software which is installed on our servers to calculate the application rate of fertilizer for your crop depending on your soil test results and the yield potential for your crop in your soil.  To use it click here fertilizer calculator and then click on cucumbers.

Cucumbers can also be grown using drip irrigation and the fertilizer applied with the irrigation.  Cucumbers respond to this very well with excellent productivity when using a cucumber trellis with crop netting.

Cucumbers have one of the highest water requirements of any vegetable.  They grow copiously with very big leaves that demand a lot of water.  When stressed by the lack of adequate water they show it quickly by their leaves wilting, the smaller cucumber fruits drying up, and halting growth, thus losing production.  (If you do without water, your productivity will be adversely affected too.)

Cucumbers demand an equilibrium between their foliage and their root system which can easily drown from excess water.  Then you have the problems that are addressed in the article about plant respiration.  We reiterate our recommendation to read it, and it is here where HORTOMALLAS trellis netting gets used.

Trackback from your site.