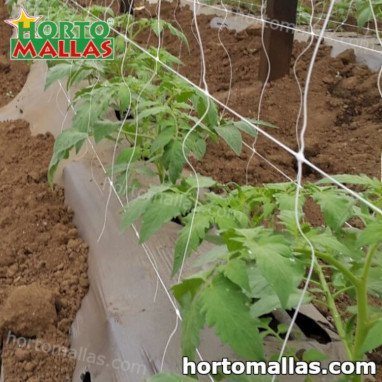 In this article we will be analyzing the various advantages of using trellis netting when growing eggplants inside greenhouses or other type of protected cultivation area.

With an adequate pruning the greenhouse grown eggplant can regrow and be harvested a second year as well, but the quality of the second harvest will be lower.

This crop is sensitive to cold damage, which appears on temperature below 50Fº. At 41 Fº cold damage appears within 6 to 8 days.

Optimal relative humidity: 50-65% if it is to low or too high it affects flowering, flowers fall, fruits can be shapeless and growth decreases.

Brightness: Eggplants inside greenhouses are very demanding on sunlight, they require from 10 to 12 hours exposure.

Soils: Little demanding on this aspect, because it has deep root systems and prefers soils with PH between 6 and 7. On acid soils shows growing  and production issues.

It tolerates some salinity, but less than tomatoes and it is more affected during initial stages of growth.

Aporcado: It is made 15-20 days after transplanting, when is pretended to provide organic material, in order to protect the plant base from contacting itself.

Formation pruning: number of plant stems are delimited : 2,3 or 4. pacifiers are eliminated and leafs that grow underneath “ the cross” and number of stems that will be left is chosen, according to the planting frame. For four armed pruning, You will need to a stem for each main arm, on which will sprout first a flower, then a leaf, and from the leaf`s armpit another stem which will be left until the  flower sprouts wich will be blunted on the next leaf`s armpit, keeping the latest.

It is convenient to apply anti-botrytis products on the cuts made.

Tutoring Eggplants:  Each of the stems left on formation pruning are hold using vertical trellis, tutoring in  greenhouse using trellising net, so as the plant grows it will thread on the trellis.

Aphyllous: Senescent and sick leafs. It is essential for plants that have not been subject to formation pruning. This must be done for dry leafs and on low environmental humidity.

Inflorescence blunting and fruit thinning: Only one out of the 3 or 4 flowers on the flower bundle will originate fruit, so it is convenient to eliminate the rest. Regarding fruits eliminate damaged, shapeless or too small.

In greenhouses we need to avoid vegetative growth from being too fast, so after planting the soil must not be too humid, since an

exuberant plant growth will cause flowering troubles and only a few flowers that could be fecundated.  This precaution must be kept until two or three fruits per plant have been produced.

When the first fruits start developing it is necessary to increase water volume, watering every two or three days, or even daily, depending on environmental conditions.

Globosa Eggplant: almost spherical fruits from black to dark purple. The most accepted on national markets. It is grown widely on greenhouses, since has little trouble on flowering and fructification. They tend to produce early harvests.

Semi long Eggplant: more or less elongated fruit and narrow than the previously descripted, low weighted. This one is the most appreciated both national and foreign markets. New varieties are appearing for its development on greenhouses and are also well adapted for outdoor growing.

Planting Eggplants inside greenhouses in Almeria, Spain is done in the middle of August and harvesting from the end of September to December.

Planting from August 15th till September 15th starting harvesting in October and ending in June.

Planting at the end of December , starting harvesting in March and while ending in June.

Eggplant must be harvested before seeds start swelling, since this makes the fruit taste bitter, best time to harvest eggplants inside greenhouses is when fruits appears brilliant. Normally the time between two consecutive cuts goes from 5 to 10 days, depending on environmental conditions.

Cut the fruit in the morning, if possible not humid, considering also safety regulations for active chemical substances employed.

Always use scissors so not to tear the plant´s stems, leaving at least one centimeter on the peduncle. Growing eggplants inside greenhouses using trellising net leverages plant functions, multiplying its advantages. If there is no excellent phytosanitary control and practices in place, problems will grow exponentially.  That is why using vegetable plant support netting on both sides of furrows of eggplants is essential as it reduces mechanical transmission of diseases and plant stress.

Ensure proper fruit manipulation to prevent bruising or damages that will lower the crop value.

Plagues and diseases of eggplants inside greenhouses:

It provokes discoloration, dotting or yellow stains on leaves underside, even though they may be seen on the beam plant  as first symptoms. On larger populations it produces desiccation or even defoliation. The more serious attacks are produced during the early phenological stages. High temperatures and poor relative humidity stimulate this insect´s appearance.

Curled nerves on apical leaves and sprouts, and curving on more developed leaves. As attacks become more serious on eggplants, dwarfism appears and an intense green coloring of the plants.

Adults lay on the leaves´ undersides. Direct damaging ( Yellow color and general weakening) are caused by larvae and adults by feeding, absorbing sap from leaves. Indirect  damage are due to bold proliferation over the molasses produced during feeding, staining and depreciating the fruits interfering with normal plant developing.  Also this insect causes the mechanical spreading of viruses and other diseases from an infected plant to a healthy one.

Adult females lay eggs inside young leaves´ tissue, where larvae starts to develop and feed on the parenchyma, occasioning typical galleries and .

They produce root nodules, penetrating them from the soil. This damages produce vase obstruction preventing proper absorption trough roots. This decreases plant growing and also makes symptoms appear as withering during heat hours, clorosis and dwarfism. They are distributed in lines and easily spread by irrigation, shoes, implements and any soil transportation mean.

It produces brown damages in fruit and flowers, soft rot ( more or less watery according to tissue) on which a gray mycelium fungus can be found.

It produces white rot ( No bad smell) watery at the beginning , that later dries up depending on tissues succulence. Covering later also with abundant white like cotton mycelium. Multiple white sclerotia are also observed  that will later turn to black.