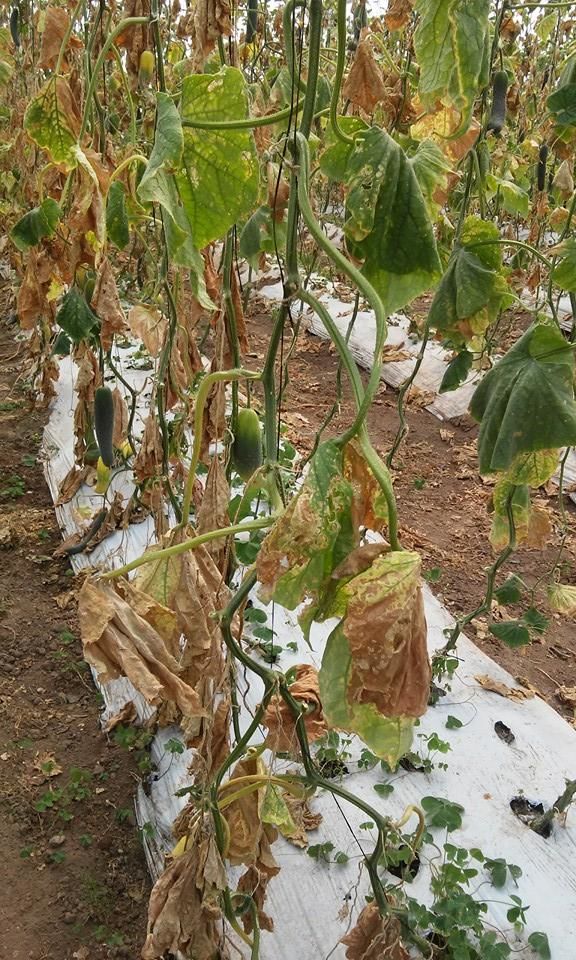 The prevention of crop loss due to fungi in the production of cucumbers by applying a staking system.

Cucumber is considered a vegetables of great importance, but is easily attacked by fungi. Cucumber is important to the agronomic industry not only because of it’s high demand in the food and cosmetics industry, but also on the economic side, its importance due to it generating jobs in the fields.

The agriculturist should obtain all of the necessities to ensure that his cucumber crop obtain a high quality production. One method of doing this involves introducing a system of staking, which helps to avoid the formation of the necessary conditions that certain phytopathogens need to develop; while at the same time applying preventative treatments against plagues and diseases, which minimizes the risk that the crop will contract a disease, preventing significant loss of production.

Causes of mycotic infection in a crop

The conditions in which a fungal infection can grab hold in crops are numerous and oftentimes due to small mistakes.
The way in which fungal provoked diseases spread can be through: irrigational water splashes, wind, direct contact from an infected plant to a healthy one, and direct contact from workers or their badly disinfected tools. Additionally the diseases caused by fungi require prolonged periods with high humidity concentrations.

Mycosis in cucumber: various fungi cause wilt in roots

The fungus Didymella bryoniae attacks the stem of the plant, the symptoms of which are aqueous injuries with a brownish discoloration. The formation of small droplets can be observed on the surface of these injuries. Upon the advancement of this disease, the formations will change coloration and darken to black. Serious cases of this infection can potentially cause plants to collapse.
Under normal conditions the infection will not reach the fruit, but it will cause a soft rot when it does happen.

Downy mildew is a very common fungal infection in cucumber

Pseudoperonospora cubensis is responsible for the disease called downy mildew. This is a common disease in cucumber due to their need for high humidity concentrations.
The first structure of the plant to be attacked by this pathogen is the foliage. The first symptom to presents itself are usually stains or blotches that are clear yellow to pale green in coloration which eventually turn bright yellow; these characteristics are observable on the surface of the leaf. The effected areas on the underside will typically be of a whitish coloration. If the infection becomes serious the stains can expand, necrotizing the tissue, provoking the leaf to fall from the stem and causing a defoliation which can leave the fruit exposed to the sun. If favorable conditions continue to be present around the fungus, sporangium (the structures that produce spores) can form and leave the underside of the leaf with a fuzzy looking appearance.

Powdery mildew is not a common fungal infection in cucumbers, but can defoliate the plant once it starts attacking.

The fungi responsible for this disease are Erysiphe cichoracearum and Podosphaera fuliginea. The cucumber plant is normally resistant to these pathogens, but on occasion when conditions are favorable enough for these fungi and the cucumber is not completely healthy they can be contracted. Powdery mildew can affect the leaf, petiole, stem, and occasionally the fruit of the cucumber. The lesions in the leaf take a white powdery look (this is where it gets the mildew name). If the infection is sufficiently advanced the leaves can wrinkle and finally fall from the plant. If the lesions are present in the stem advance to a strong enough infection, they take on a yellow color which will later dry out.

The fungus Alternaria cucumerina can be introduced to the cucumber plant either through direct contact or any available open wound. Once the fungus is introduced to the plant, it will produce lesions that can present themselves in the leaves, stem, flowers, and fruit.
The first symptoms to manifest usually are in the leaves, in which concentric dark colored necrotic stains appear. As the disease progresses the stains will turn a yellow coloration.

The Botrytis fungus needs to be removed from the crop as soon as possible because it is highly contagious. It is very important not to handle or touch any healthy plants after having touched plants infected with this particular mycosis.

Botrytis cinerea is responsible for this disease. The normal method of contagion is similar to the previous pathogens, but it is also important to remove all placed structures of the previous crops. If the infected plants happens to be young they will start to wither, while older plants will start to get brownish spots on leaves and petals. When the fungus manages to reach the fruit it will become soft, and a gray colored mycelium will be observable on its surface.

This fungus is easily recognized by its color and the rot it provokes in seedlings.

Sclerotinia sclerotiorum is responsible for this infection. Similar to the gray rot this fungi produces rot in seedlings. The plant can present parts with soft rot, which will initially presents a watery consistency that eventually dries up, but becomes full of white mycelium that will turn black. If the plant acquires this disease in its stem it will eventually collapse.

Leveillula taurica is the fungus that provokes oidiopsis. This fungus is sporadically observed in cucumber crops. Observable symptoms include yellow colored stains in the upper leaf, eventually leading to necrosis inside the stain. These lesions take the appearance of a white colored felt. When the leaf becomes heavily infected due to the advancement of the disease it ends up falling off the plant, letting the sun rays affect the fruit.

Cucumber is very susceptible to the mechanical spread of contagions. While part of these transmissions are due to insects being a vector, it should be noted that many viral, bacterial, and mycotic infections are due to contact with the hands of laborers during the staking process. HORTOMALLAS® reduces the necessity of using your hands to guide the cucumber plants.

Vegetable support netting by HORTOMALLA as a trellising system helps crops by providing a vertical espalier. This support makes it possible for the plant to grow above the surface of the ground, which prevents direct contact with the possible accumulation of humidity in the soil. This system also increases the amount of leaf area exposed to solar light increasing the photosynthetic activity of the plant. Additionally, this gives the plant and the soil better ventilation which helps eliminate concentrations of humidity. This has the side benefit of possibly reducing the amount of labor which will reduce possible sources of contagions.

Methods of prevention and control of fungi in cucumbers

 Start agricultural practices on time.
 Implement a disinfection process on the terrain, including both the soil and the structures that form part of the installation.
 Acquire seeds that are free of contaminants.
 Provide a system of support to the crops.
 Implement the agricultural activities taking care to observe the required sanitary measures; the disinfection of all utilized tools, and the disinfection of laborers both before and after handling any plants.
 Apply preventative treatments.
 Constantly monitor the crops to identify any possible sources of infection.
 Remove any infected plant.
 Ensure that the crops are not exposed to long periods of high humidity.
 Have an adequate drainage system.
 Implement a crop rotation system.

The products that can be applied for the treatment of fungal infections are: