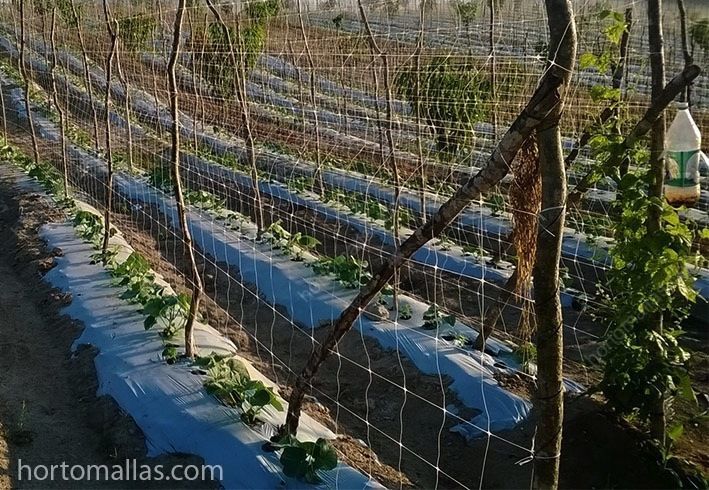 The cultivation of cucumber is an important part of the agricultural sector, so preventing diseases in cucumber plants is a key factor for the crop success.. Its value is reflected economically due to its high demand.

This crop can be attacked by various types of diseases in cucumber are caused by microorganisms such as fungi and bacteria. These microorganisms require certain conditions to be able to successfully reproduce themselves. If the agriculturist does not take precautions to reduce these favorable conditions of these pathogenic organisms, his crops can be victims of one of these diseases.

If you use supportive netting to help support your crop, you will also create better growing conditions for it at the same time as reducing incidents of the following diseases.

This is a foliar disease, caused by the fungus Pseudoperonospora cubensis. This fungus needs long periods of time at a high humidity to activate, such as evening dew.
The symptoms can be seen primarily in 5 to 15 day old leaves. The upper leaf will start to present spots ranging from light green to brilliant yellow; the underside of the leaf presents the spots in a much lighter color but in a few cases can start to necrotize. If in the morning hours droplets are observed around the discolorations, this signifies that the fungus is active. If the climate is favorable, the fungus will develop its reproductive structures (called sporangium), giving the leaf a woolly appearance and turning dark gray to purplish. When the infection is at its peak it invades the leaf and necrotizes it completely, leaving the fruit exposed to the suns rays and provoking lesions, reducing the production of fruit in both quality and quantity.
This fungus can move itself to other leaves by either wind, water splashes, laborers, or agronomic tools. It can be controlled chemically by using Morfoline and Ditiocarbamato.

This disease does not usually infect the cucumber crop, but occasionally conditions are correct for its formation. This disease does not only form in the leaves, but also in the petiole and stems, with white round and powdery spots forming. These spots can be observed developing directly on the plants tissues and are formed by the mycelium and reproductive structures of the fungi Sphaerotheca fulligineae and Erysiphe cichoracearum.
This is a very destructive pathogen in the summer months due to the drought, the wind is its method of dispersion to infect other new plants. Chemical solutions to these fungi include Cyproconazol, Azoxystrobin, Sulfur, Tebuconazole, Tebuconazol + Triadimenos, or Difenoconazol.

This pathogen is provoked by Phytophthora spp., Pythium spp., and Fusarium spp., which are fungi that are native inhabitants of the ground. The symptoms that form are; problematic germination for the plant, withering in young plants, and rotting of the fruit if they are in contact with the ground. You can control them with Carbendazim, Thiabendazole, and Propamocarb.

This disease is produced by the bacteria Pseudomonas syringae, with the lesions present in the leaves near the angular point, but starts with small humid spots and on the underside with a grayish aqueous color. There is a possibility for a yellow halo to apear with the effected part drying up turning the tissue thin and delicate until it falls off. The fruit is only affected superficially. This disease contaminates seedlings by mechanical transmission, either by the work of the laborers or their contaminated tools. It can be controlled by copper antibiotics.

As can be observed, the principle cause of the spread and attack of these pathogens or diseases in cucumber is basically excess humidity and occasionally because of a bad staking or trellising system. A few measure that can be taken to lower the probability that these contagions will attack your crops are: avoid the accumulation of moisture with a good drainage system, light watering, and well prepared soil, a crop rotation system, and the utilization of HORTOMALLAS® supportive netting to give vertical support to your crops, ensuring that your crop has minimal contact with the ground and far away from the humidity, but at the same time permitting the crop to have better aeration to avoid long periods of high humidity which the pathogens would take advantage of. Not only will the support net reduce the humidity, but the HORTOMALLAS® netting will allow you to spend less time on manual labor and make your activities more practical, a side of which is that this will reduce the contact that laborers will have with the crops and possible sources of contagions.