Cukes are natural climbers that grow healthier on a vertical trellis system.

The reason one should use a cucumber trellis when growing cucumbers, is because cukes, like most cucurbits, use climbing tendrils to climb upright towards the light source and by doing so they extend their branches vertically allowing better air circulation.  When you are able to increase air flow, you reduce mildew from accumulating on the leaves and this in turn will decrease the possibility of fungal attacks due to excessive humidity. 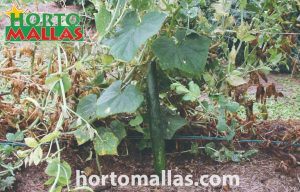 Growing cucumbers is better when they trellis vertically allowing their tendril to attach to the netting support.
So using a trellis net like HORTOMALLAS will increase your yields due to better phytosanitary conditions and to the well identified fact that by allowing plants to trellis naturally without manual training, one reduces plant stress (mechanical stress to be exact) which usually turns out to have negative consequences of about 8 to 10% in yields, as the plants need to concentrate their energies to rearranging leaf orientation towards the sun after one manually trellises the plant on a twine or stake.   Let us remember that plants are efficient organisms, they naturally maximize their photosynthetic functions and flowering, if we intervene mechanically each time there is a vegetable tutoring operation, we break that natural order and force the plant to reset itself instead of sending energies and lymph to the fruits that need to be filled.  Basically each manual operation we are delaying fruit production for about 3 to 4 days.

WHY CUCUMBER NETTING RATHER THAN GROWING ON THE GROUND.

HORTOMALLAS cucumber netting will prevent plants mismanagement due to mechanical stress or even mechanical transmission of pathogens, a condition that is quite common in intensive cultivations as the hands of the workers become the silent vectors for the transmission of diseases from a sick plant to the rest of the healthy population during handling.

There are many benefits of cucumber trellis for you as a gardener and your plants. We will explore this advantages here. To make a proper trellising system for cucumbers, you may need the following items: 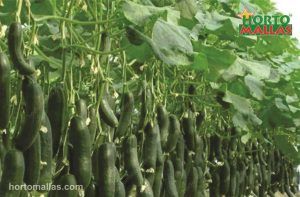 Hortomallas´s best known product is the cucumber trellis netting, usually for most plantations a 1.5 meter high net is sufficient as the first 30 cm off from the ground do not need to be trellised as the cucumber plant can find its way up naturally using its tendrils to cling on to any sturdy structure.
The instruments needed to prepare a cucumber may include the ones listed below: 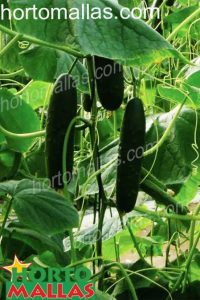 Cucumber trellis enhance your crops thanks to better air and solar exposure. Uniform fruits and a longer lasting plant will be the byproduct of choosing to support the plant with netting.

In this article, you will learn a very easy and cheap method of making cucumber trellises within some hours.

Before we continue, we have to know more in-depth details about espaliers. Posts for trellises usually have a total height of about 8 feet and 3″ in diameter. Only a length of 20 inches of the pole should be buried in the ground so as to produce a trellis between of 75 to 70 inches tall. The dimensions above can contain up to four cucumber plants comfortably; two cucumber plants at each side. 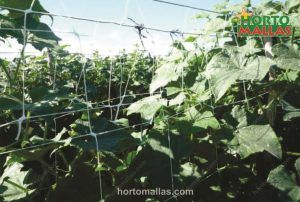 HORTOMALLAS cucumber trellis will last many growing seasons even when used outdoors.

LET THE TENDRILS DO THE CLIMBING TO GROW YOUR CUCUMBER: 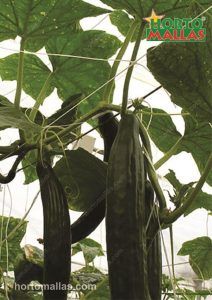 Cucumbers are natural climbers, and can be also grown on a horizontal trellis system (pergola) very profitably.
Conclusion: Commercial cucumbers growers know well the advantages of using a cucumber trellis netting like HORTOMALLAS, as the plant will have greater flowering percentages, pollination will improve thanks to the better exposure to the sun and air, fruits will be larger and uniform in both size and color.  Sugar content will improve as leaves are better able to capture solar energy and transform it into Brix degrees.  Plus a plastic netting system will be much easier to install and store after use than a backyard system as described above.  HORTOMALLAS lasts many years when used in a greenhouse, and 3 to 4 cycles when used outdoors in an open field, and can be used in a crop rotation calendar. 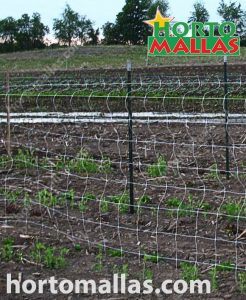 A cucumber trellising system made out of HORTOMALLAS netting supported by T-posts.