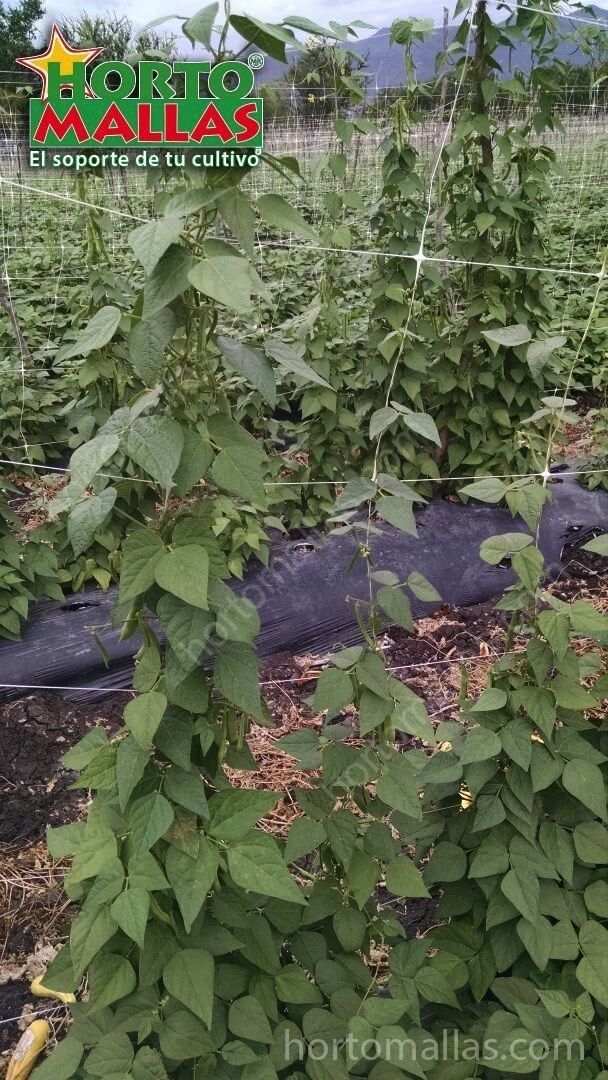 Make the most of your field investments with crop rotation

a practical way of utilizing tutor netting with the other placed structures in the field, since this trellis netting can be used many times with alternating harvests.
There are many benefits to using a crop rotation system that will help increase your profits, not only by directly increasing your crop yields, but also in monetary saving that come from needing to use less agrochemicals such as fertilizers and pesticides. For example, if one of your crops has a high nitrogen requirement, having a mono-culture every season would steadily deplete the soil of nitrogen and you would receive lower yields after a certain critical level of nitrogen depletion. A good crop to plant with crop rotation when you have soil depleted of nitrogen that takes advantage of our HORTOMALLAS® trellis net are beans or almost any crop of the legume family.

In the photograph, we can see the bean crop almost ready to be harvested; this is the second crop in the same field, using the same padding, irrigation, netting, and rods. The previous crop (as can be seen with the dead vegetative material between the rows) was cucumber.
After harvesting the cucumber, the plants were cut, left to dry a few weeks, and during the new moon a new crop was sown where the cucumber had been planted. As soon as the bean starts to come out of the

earth, it grabs onto the HORTOMALLAS® trellis net of the dry cucumber. The cycle repeats again with cucumber, since the leftovers of the beans (nitrogen fixers) help fertilize the ground for the cucumber harvest… and it continues as such until climatic, phytosanitary, and terrain conditions require a change of crops or to let the land rest! In this image you can see how the producer chose not to use horizontal netting in the top part of the stakes, leaving the netting to act as the horizontal tensor, further increasing profits through the savings on labor and materials.